Global Dialogue is available in multiple languages!
Select the language to download the issue.

In the past, social theory, as practiced in central (as opposed to peripheral) countries has been of a static nature, in the sense of perceiving social order as the absence of widespread conflict, and conflict as evidence of disorder. It has also attempted to become “scientific” by predicting stable social continuities based on hypothetical-deductive reasoning. Even as the fathers of sociology were experiencing the traumatic changes of the industrial revolution, they portrayed them as the difference between a fixed point of departure and another fixed point of arrival, with an undertheorized process in between: to wit, the continuum from Gemeinschaft to Gesellschaft.

Based on this general model, Latin American countries have appeared as both imperfect and unfinished, either moving from “tradition” to “modernity,” or from undeveloped (or less developed or developing) to somewhere closer to “developed.” The historical process “in between” was widely described, but not theorized as a whole[1]. The upshot, in any case, has invariably been that Latin America had “developed” unevenly and imperfectly due to world market forces (or imperialism, or colonialism), with little impact from the role people had played in the construction of social orders over the two centuries since independence.

The historical construction of social orders in Latin America

I would like to propose that Latin America, taken as a region, can be fruitfully theorized, provided that we recognize its historicity, and start from the premise that the social orders in any geographical setting are the product of formidably complex, historically constructed, and indeterminate social processes. A key question in the analysis of Latin American social orders thus concerns agency in relation to historically created institutions, and from there the questions of: (1) who acts and for whose benefit(benefit maximizing individuals, patriarchal families, indigenous communities, or capitalist profits); and (2) powered by what dynamic principles(systemic, mechanistic, or agentic). Answers to these questions depend onwhat theoretical lens can transform a collection of nineteen Latin American nations into systematically comparable, as opposed to disparate, cases.

In this short article, I can only summarily outline how my work along these lines can contribute to answering these questions.[2] The general theoretical argument can be summarized as follows: what has been produced historically in Latin America is a series of spatio-temporally limited social orders made up of mixed, and often contradictory constellations of rules, norms, and symbols that have alternately become either hegemonic, or ceased to be widely shared or enforced. Put differently, we might say that particular outcomes of this societal process have been, in turn, institutionalized, de-institutionalized, and re-institutionalized, while facing intrusions by foreign states and world corporations as part of an overarching international process of geopolitical and market competition.

From this standpoint, Latin America’s post-independence history has been powered by the alternately conflictive and cooperative interplay between institutional actors, aimed at enhancing the wealth, authority, and power of the elites closely associated with the institution(s) hegemonic at different time/places. It has also been powered by the ways in which subaltern groups have responded to the events marking their daily lives, and in turn, reinforced or modified these processes. Graph 1 represents abstractly these historical developments, in which corresponding empirical facts can be inscribed as they have happened in different countries of the region, but also as they have shared historically recurring kinds of relatively stable social orders. In this view, key institutional actors, but also people, communities, and organizations build social orders every day through their attempts to reproduce their lives and make sense of their experience. In Latin America as elsewhere, these arrangements have not, by and large, been consensual, or egalitarian, so that many opportunities for progressive change have been missed or counteracted. But that is the reality we can and must theorize, and investigate systematically, away from Eurocentric myths.

To approach this general process empirically, the study underway focuses on the relations over time between states and other institutional orders, powerful social groups, capitalist corporations, and external states, as shown in Graph 1. To attain hegemony, states have striven to dominate over their territory,[3] attain financial solvency, and defend their sovereignty. Doing so, they have exerted what power they could over their population; extracted their share from regimes of accumulation; and made concessions to superior external powers.

These are the conditions, writ large, in which Latin America’s states have acted as institutions among others. They have done so despite having emerged deeply indebted from independence wars, with scant power and authority in comparison with the Catholic Church, the latifundio,[4] or military forces, and under constant threat of interference from economically and technologically more advanced countries. 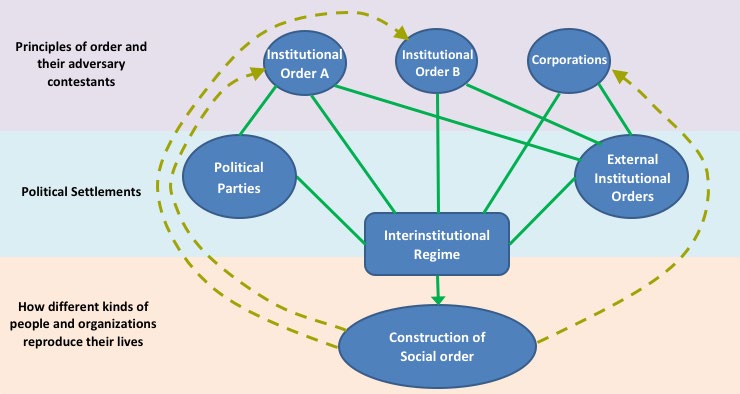 Viewed from this angle, the problems facing Latin American states since 1810[5] have been glaringly different from those experienced since the 1500s by model European nations[6] to which Latin American nations have been repeatedly compared, mostly unfavorably and anachronistically. By adopting this approach, we can theorize the making and unmaking of social orders in Latin America not in terms of Euro-centered would-be universal principles, but as comparable and historically changing instances of the historical dynamics created, transformed, and discontinued since 1810 from Rio Grande[7] to Tierra del Fuego.

[1] Excepting dependency and world system theorists such as Cardoso and Faletto, Wallerstein and Arrighi, as well as Boserup and Hirschman.
[2] This book presently in progress is expected to be completed by July 2021, and published in 2022, both in English and Spanish.
[3] The Weberian idea of states as entities dominating over their territory through monopoly of the legitimate means of violence is taken here as historically problematic instead of definitional.
[4] Latifundio is the generic Spanish term referring to large landed properties.
[5] May 1810 marks the start of independence wars in Buenos Aires and Mexico.
[6] Comparisons have been restricted to Great Britain, France, or Prussia, leaving out the remaining 24 European nations.
[7] Río Grande became the northern-most border after annexation of more than half of Mexico’s territory by the United States in 1848.

Primitive Accumulation and the Critique of Law

Towards a Post-Liberal Grammar

The Age of Neglect: A Systems Theory of Crises

The World Paradigm: A New Proposal for Sociology

This issue is not available yet in this language.
Request to be notified when the issue is available in your language.

We have received your notice request, you will receive an email when this issue is available in your language.

If you prefer, you can access previous issues available in your language: